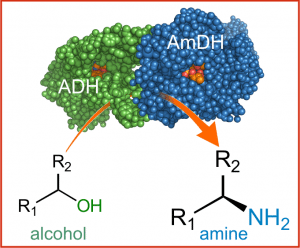 Chiral amines are the most widely used intermediates for the production of active pharmaceutical ingredients (APIs), fine chemicals and agrochemicals. For instance, about 40% of the optically active drugs sold on the market contain α-chiral amine groups. Additionally, simpler amines are also of industrial interest for the production of bulk chemicals like polymers, dyestuffs, pigments, emulsifiers and plasticising agents.
Amines are scarce in nature and, therefore, are synthesised from chemical precursors such as ketones and aldehydes, ultimately originated from petrol as feedstock. Conversely, renewable bio-based molecules almost ubiquitously contain alcohol groups. Hence, the direct conversion of alcohol starting material into chiral and non-chiral amines is of one of the key aspects for moving towards a bio-based economy.
The ERC project BioSusAmin aims at contributing to tackle these challenges by creating efficient artificial biocatalytic pathways that can catalyse chemical conversion in efficient manner. The biocatalytic pathways are studied both in vitro (using isolated enzymes in solution) as well as in vivo (using whole cells microbial organisms). The targets are amine products (chiral and non-chiral) that are of interest for the chemical industry (in particular pharmaceuticals and polymers). The main objectives and challenges are:
1) The creation of a new class of enzymes, called amine dehydrogenases, which enable the synthesis of α-chiral amines as single enantiomers as well as non-chiral amines from inexpensive carbonyl compounds. The enzymatic reaction operates under very mild conditions (aqueous buffer, room temperature, atmospheric pressure) and generates a minimal amount of waste. HIMS-Biocat researchers start from analysing the crystal structure of known enzymes with defined properties and perform computational studies. Based on these in silico studies, exiting enzymatic scaffolds are rationally mutated through molecular biology techniques in order to obtain the final biocatalyst that is required for a specific transformation. The ultimate goal of HIMS-Biocat researchers is to create a tool-box of amine dehydrogenases capable of transforming structurally diverse molecules into amines of industrial interest.
2) The AmDHs are combined with other enzymes (e.g. alcohol dehydrogenases, oxidases, alkane monooxygenases) in order to create new biocatalytic pathways, which convert inexpensive starting materials (ideally from renewable resources) into functionalised amines and derivatives as final products with elevated yields, perfect chemo- regio- and stereoselectivity, enhanced atom efficiency and minimum environmental impact. The atom-efficiency of the biocatalytic pathways is enabled by the internal recycling of redox equivalents, the use of inorganic ammonia as nitrogen source and, if necessary, only molecular oxygen as the innocuous additional oxidant. In most cases, water is the sole by-product.
HIMS-Biocat researchers have already demonstrated the feasibility of their approach by converting a set of structurally diverse alcohols into amines (as single enantiomer) using a tandem combination of two enzymes: one alcohol dehydrogenase with one amine dehydrogenase. The process possesses the maximum resource efficiency as it converts an alcohol directly to an amine, consuming only ammonia and generating water as the sole by-product. A follow-up study using co-immobilized enzymes demonstrated that the system is economically viable as recycling of the enzymes for few cycles in batch was accomplished.

The BioSusAmin project will contribute to the development of a new generation of (bio)chemical processes that will reduce the impact of human activity on the environment, will make our society less dependent on non-renewable resources and will allow for the reduction of energy consumption in chemical manufacturing. Increasing resource efficiency is also a fundamental aspect for securing growth and jobs as it will bring major economic opportunities, improve productivity, drive down costs and boost competitiveness. In this context, biocatalytic solution to chemical problems can play a pivotal role. In summary, BioSusAmin underpins quality of life in many areas such as the sustainable manufacture of chemicals, healthcare, energy, environment and creation of new job opportunities. 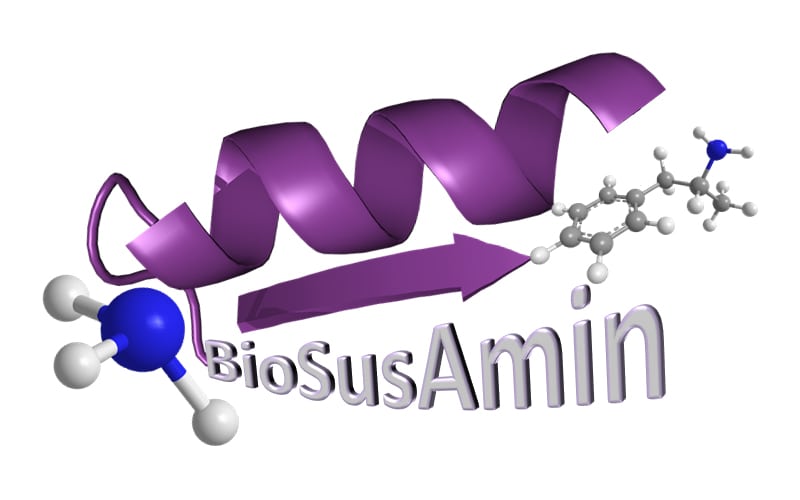