Between light and matter 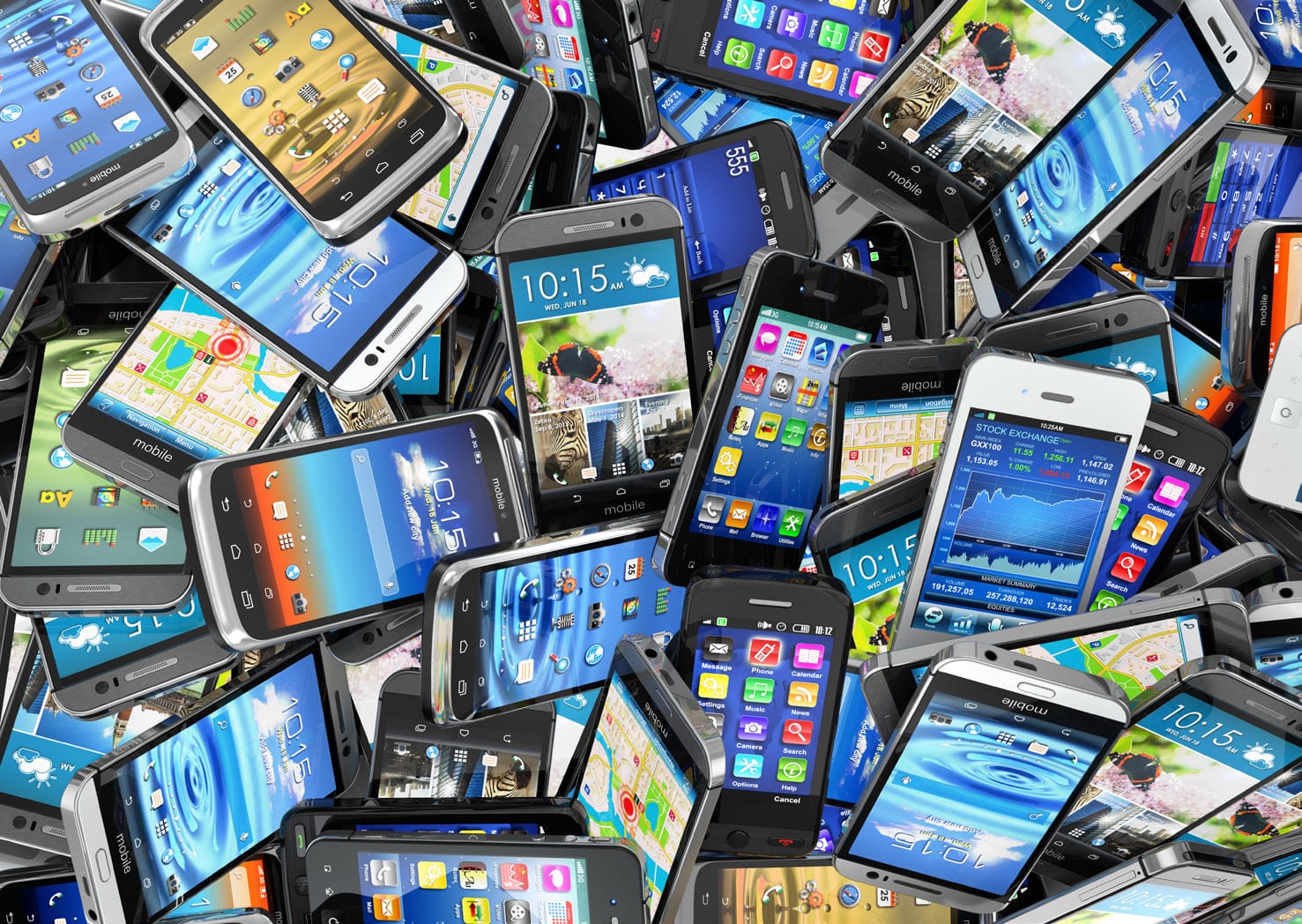 Amidst a number of concurrent fields (e.g. electronics, spintronics, amtronics), photonics aims to address this technological need by exploring novel means for the generation, transmission, manipulation and detection of light. One of the most striking successes in this field is optical fibre, thanks to which we have high-speed internet. Optical fibre’s ability to transmit light pulses over long distances at a high bit rate is centred on the concept of optical soliton—highly nonlinear perturbations of a background field that can propagate at the speed of light while retaining their shape.

Besides mainstream photonics technologies primarily based on solid-state materials such as silicon, the past ten years have seen impressive achievements in the field of liquid crystals (LCs) with advanced optical devices going beyond the well-known LC displays of our mobile phones, computers and TVs. Relying on the facile response of these soft materials to external fields (electric, magnetic, etc.) and their fluid-like properties, the goal of most of these applications is to explore alternative routes for the management of light at the microscopic level for which solid-state materials are not best suited. For example, one can mention the bio-compatible micro-lasers, -resonators and -sensors developed by the group of Humar (2016, 2017), the ultrafast photonics components of Muševič’s group (Vitek et al., 2015) similar to the transistors of electronics devices, and the micro-optical elements of Lavrentovich’s Group (Jiang et al., 2018) allowing to shape light beams in a controlled way.

Motivated by these early successes, the EU-funded OPTOSOL project is investigating novel interactions between light and matter in chiral LC systems. Chirality is a fundamental property of matter which requires that an entity (going from molecules to tangible macroscopic objects) is distinguishable to its mirror image, like a left or right hand. Such a property has fundamental consequences on the physical behaviour of materials: for example, think about how maple tree seeds fall with a rotational motion due to their helix-like shape (a very common example of chiral shape).

In the context of our project, introducing chiral molecules into LCs allows the stabilisation of very robust structures called topological solitons. Like balls of yarn which cannot be easily unrolled at once, topological solitons are ‘knotty’ objects which cannot be destroyed in a continuous manner. The fundamental goal of the OPTOSOL project is to determine, with numerical and theoretical approaches, how topological solitons can be used to deflect and control the path of photons in chiral LCs, similar to a billiard ball deflecting the trajectory of another moving ball after collision.

This goal is not as trivial as pointing a laser beam towards one such topological soliton—usually embedded deep inside a LC layer—and seeing what happens! Indeed, miniaturised devices require laser beams with very small lateral extent (as small as a hundredth of a hair’s breadth), which typically spread out very quickly in most materials, including LCs. In short, one needs some kind of guiding wire to bring all the photons we need towards the microscopic topological solitons, akin to the usual wires bringing electrons to processing components in electronic devices. Fortunately, a mechanism exists which does precisely this without needing anything other than the laser beam itself, by increasing its optical power, a laser beam can create its own guiding wire directly inside the LC material and therefore propagate without spreading out—an impressive phenomenon which was discovered in the groups of Prof. Assanto and Prof. Karpierz in the 2000s (Karpierz, 2004; Peccianti et al., 2006).

In our work, there is a fundamental (and literal!) twist: we discovered that by adding chiral molecules into the LC, the laser power needed to generate the soft guiding structure (the ‘optical wire’) can be significantly reduced: indeed, the chiral molecules actually boost the creation of the optical wire by locally destabilising the orientation of LC molecules around the guided laser light, which in the studied system bounces between two glass plates (Figure 1). This fascinating result was published in Physical Review Letters (Poy et al., 2020) and could lead to potential applications for low-power optical devices using the laser beam energy to tune themselves, beyond the use as simple guiding wire in this project. 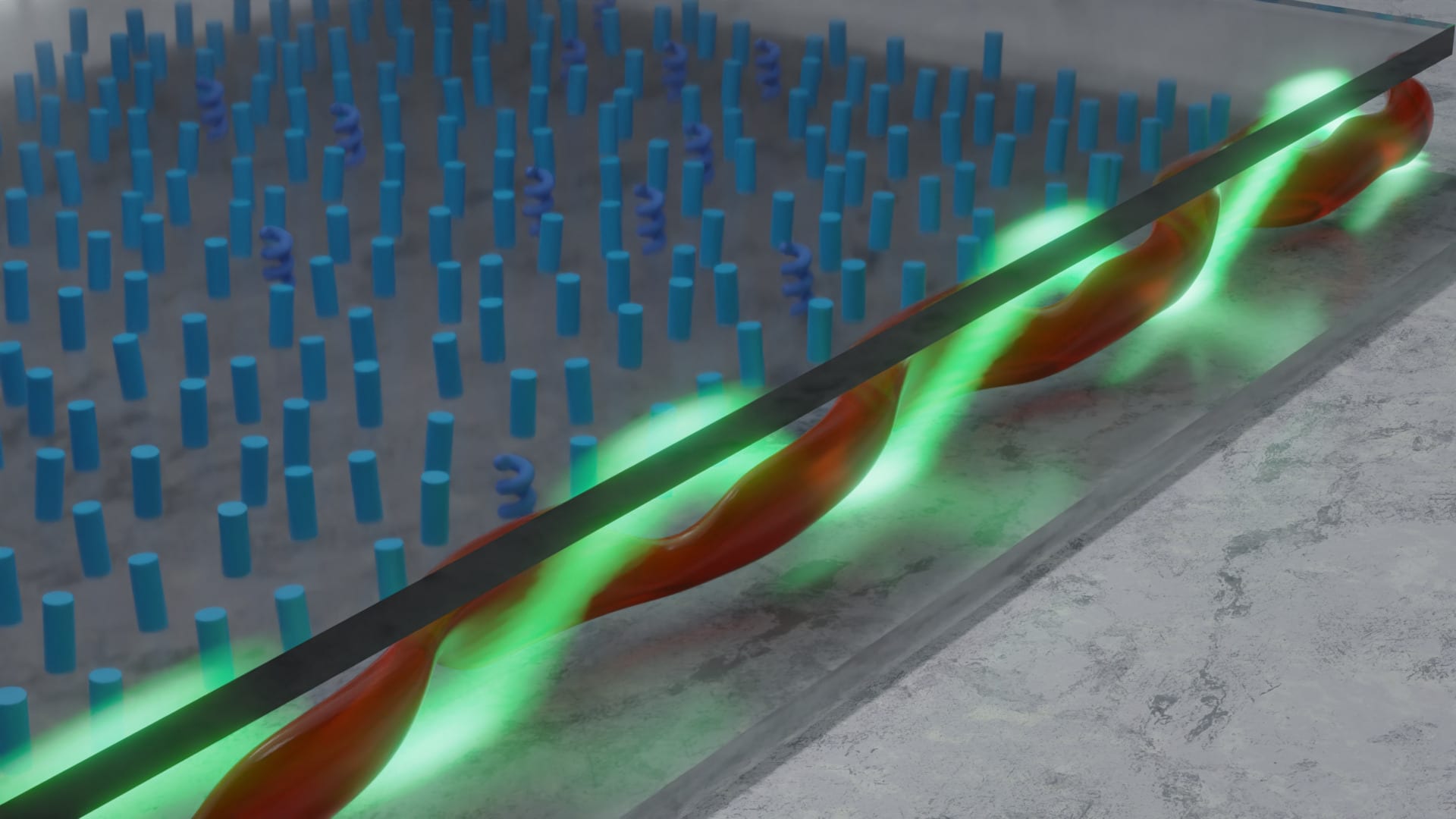 Figure 1: Artist visualisation of a bouncing laser beam (in green) in a chiral LC sample. Thanks to nonlinear optical effects, the beam profile can preserve its shape over long distances, as if it were guided by a wire. The red domain corresponds to a typical domain of perturbed LC molecules helping the formation of the optical wire.

Our second achievement was to demonstrate for the first time how topological solitons in LCs can provide new means for controlling the flow of light at the microscopic level. We demonstrated a set of simple laws that can describe the behaviour of laser beams incident on ball-like topological solitons such as the one visible in Figure 2. By properly adjusting the topological soliton position with respect to the laser beam, one can deflect the path of light or even tightly focalise light like a magnifying glass. Furthermore, one can also change the topological solitons’ size using external electric fields, thereby controlling how light is transformed inside the chiral LC sample in real time. This study was published in Physical Review X (Hess et al., 2020) and opens a new paradigm of interconnected optically-active devices based on topological solitons: by using multiple ball-like solitons such as the one in Figure 2, one can create the optical analogous of electronic logic gates, i.e. devices which can make computations based on light instead of electrons. 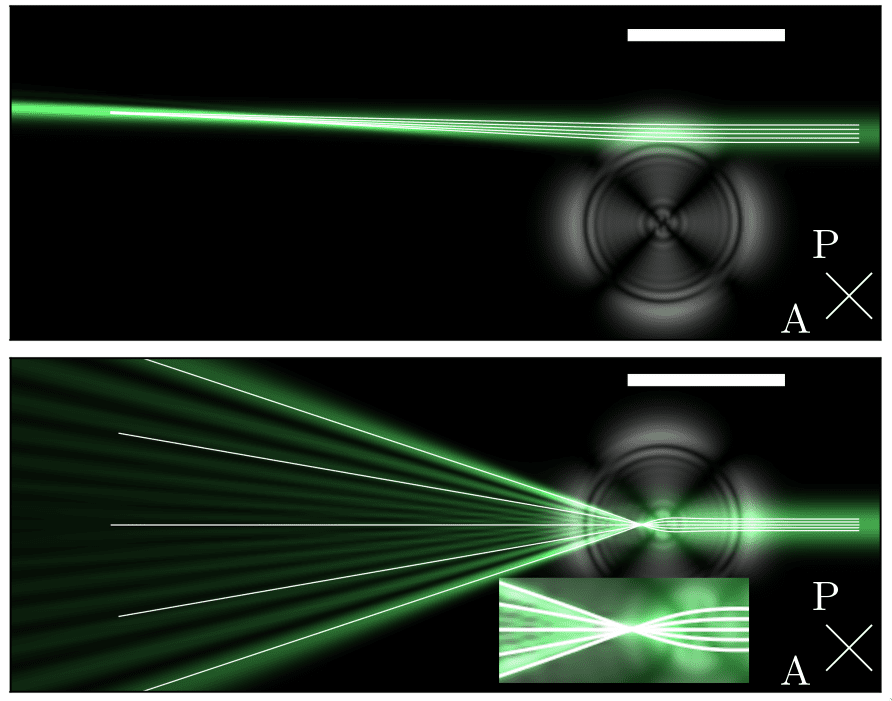 Figure 2: Simulated interaction of light (in green) with a topological soliton (bright circular object), with deflection (top) or lensing (bottom) behaviour depending on the beam incidence position. White lines correspond to the theoretically predicted direction of propagation of photons. The white bar represents 100 µm. 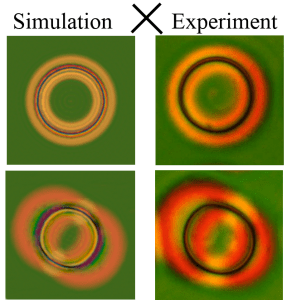 Most of our results were obtained with novel theoretical and numerical tools developed during the fellowship. One of these simulation tools was key to obtaining images such as the ones in Figure 2 and was published as an open-source microscopy software called Nemaktis (https://github.com/warthan07/Nemaktis). Beyond the project OPTOSOL, the software Nemaktis was also exploited in collaboration with the photonics group of Ghent to identify novel classes of topological solitons which could be used in optical applications in optical applications, such as the ones shown in Figure 3 (Berteloot et al., 2020; Nys et al., 2020).

In addition to the fundamental results, proof-of-concepts collaborative experiments realised in the group of Prof. Smalyukh (Boulder, Colorado) showed great promises for future investigations and applications in this exciting new field of topological-soliton-based photonics. After doing simulations and theory during the past three years, my current goal is to switch to an experimental physics group to experimentally implement new ideas I had during the fellowship. 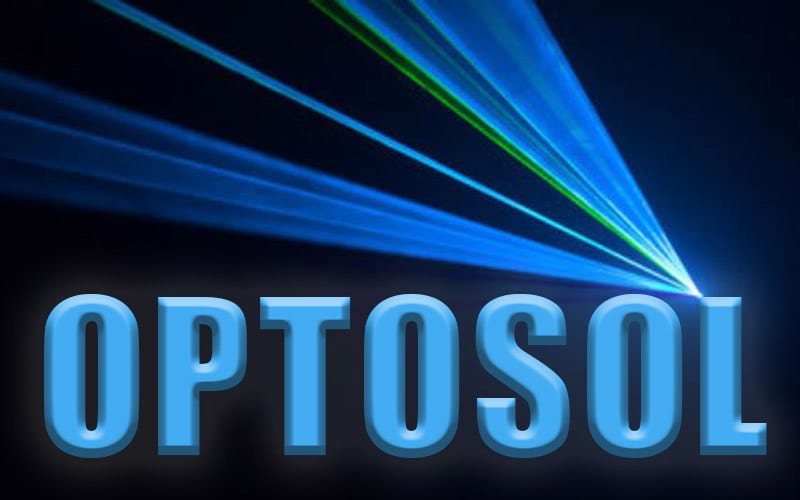 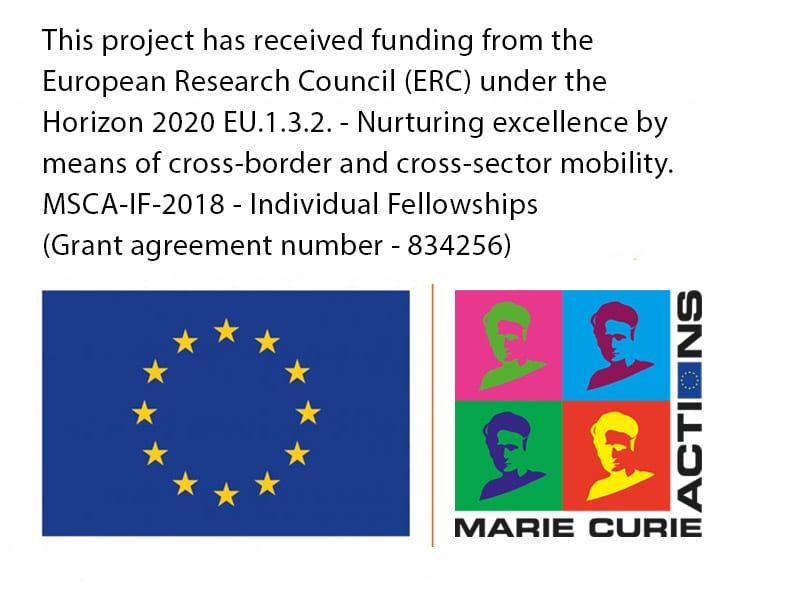