We live in Late Antiquity: a world in mutation, a moment of transition between two historical periods, while the established codes inherited from previous generations face major upheavals. Christianity was the game changer which turned Graeco-Roman civilisation into Byzantium. Unexpectedly, angels were prime witnesses of this process. Questioning their origins is to undertake a far-reaching journey that uncovers the mechanism of the human mind and societies when it comes to fundamental questions. Now, like then, mankind dramatically seeks what its place in the Universe is.

Angels are a concept, that of the intermediary. God is too far to allow direct communication. Hence the need felt in most if not in every religion to materialise a link between the lower and the upper level. We are all used to the traditional imagery of Christian angels, as to instantly picture some gracious figures with wings floating in the air, all shiny and luminous in their white garments. The surprise is that this embodiment is just the last of many options

previously explored to define the notion of angel as the relation between human and divine. The project’s acronym ALATA—The making of Angels in Late Antiquity: Theology and Aesthetics—means ‘winged beings’ in Latin. Wings visually symbolise the double motion of these entities, downwards from Heaven, upwards from Earth.

Cherubs, for instance, are particularly exotic: several millennia before our era, in Mesopotamia, they were protective geniuses, sculpted on both sides of monumental gates as giant human-faced bulls with wings. In the Old Testament, the ancient Hebraic tradition (Ezechiel 1:10 vision) followed by Christian scriptures describes the cherubim as winged, blazing creatures with four faces of bull, man, lion, and eagle, accompanied by wheels of fire. Christian angels instead favour anthropomorphism, like the gods of classical mythology. As herald of the Olympians, Hermes/Mercury personifies the main function of angels: the words ἄγγελος angelos in Greek, angelos in Coptic or mal’aka in Syriac translate as ‘messenger’, one who communicates God’s decisions to mortals.

A melting pot; that is what the Roman Empire in the first centuries after Christ was. Countless influences mingled together as an extraordinary laboratory of ethnicities, languages and ideas. From there emerged the canonical figure of the angel who also passed onto Western medieval thought and subsequently reached down to us. In order to embrace such complex and multi-faceted material, a collective dynamic arose from the ALATA project. It materialised as an online conference (2–3 July 2020) whose proceedings in French and English are currently under peer-review and will appear under the title “Inventer les anges de l’Antiquité à Byzance: perception, conception, representation.” International scholars, at an early stage career, confirmed or senior, contributed highly innovative articles on theology and arts of not only Christian but also Pagan, Jewish, Gnostic, Manichean, as well as Islamic, Buddhist and even Yezidi angels.

Powers of image, images of power

The human father of angels chose to write under a pseudonym: Dionysius the Areopagite. He produced the first essay entirely dedicated to the celestial hosts. His true identity is still unknown and probably will remain so. Nevertheless, it is possible to hypothesise that he was active in the early sixth century CE, in the region of ancient Syria-Palestine. His writings had an immediate impact on theology, and he was made a saint in the Orthodox Church. His claim of fame is not small: Ps-Dionysius is the mind who created the word ‘hierarchy’ (from the Greek ieros sacred, and arkhe rule). This commonly spread concept was coined specifically for angels. It explains how they inhabited different levels of the air, according to the highest (seraphim, cherubim, thrones), middle (dominions, virtues, powers), and lowest orders (principalities, archangels, angels).

Power and image: the pair always walk together. The opening lines of Ps-Dionysius’ treaty acknowledge the myriads of angels’ depictions which populated churches, public spaces and private houses, as imperfect yet necessary reflections of the invisible, immaterial reality. But such images were also important in the political sphere. Imperial propaganda would use them to shape their people’s minds through visual art. Archangel Michael is thus depicted as a high-ranking army officer protecting the sovereign. As the backbone of the ALATA project, our research on the issue of representation will result in a scholarly book.

Angels stand at the cutting edge of a gender- related renewal. Logically, they should have nothing to do with sex, for they are bodyless, pure spirits. However, the ambiguity exists since the Bible: angels are said to have had intercourse with mortal women, breeding the race of heroes (Genesis 6:2-4). Christian angels are nevertheless thought

of as sexless. They were accordingly never represented naked. Even though angels borrowed iconographical and schematic features from the cupids—the messengers of love, especially appreciated in the décor of luxury villas and ornate sarcophagi—the very fact they were dressed was enough to unmistakably differentiate the two categories.

One must also not forget that the third sex did exist. Eunuchs were a reality at the time. In particular, they would be employed for the personal service of the emperor and the empress in the Great Palace of Constantinople. Based on non-biological data, the notion of angels was built on an enby (non-binary) perspective. But because God himself is gendered, angels went to be considered as tendentially masculine, albeit non-virile. As for their feminine appearance, it mostly has to do with the fact they are young, and somehow pre- gender determined. An essay will explore these various perspectives.

As the COVID-19 pandemic struck and developed in spring 2020, I found myself in a peculiar position. Thanks to my supervisor for the ALATA project, Prof. Béatrice Caseau at Sorbonne University, I was given to teach for that term a course on monasticism in Byzantium. The Greek for monk, monachos, comes from the word monos, solitary. Those long months allowed me to reflect on what isolation concretely means, and on the impact lockdown could have on a person and on society. While introducing— behind a screen—students to the way of life hermits voluntarily embraced, I could not help thinking that none of us either individually or collectively had actually had any choice. The loneliness of the anchorites buried in the deserts of Egypt or perched on the steep peaks of Sinai crucially echoed our situation.

Once again, angels came and helped to understand what was going on. For the ideal that ancient monks were striving for was precisely to live the life of angels,

i.e. a progressive and ultimately complete detachment from any daily concern of this world, to try and be worthy of the next one. That is definitely food for thought for any of us, and possibly a wake-up call for some.

Inspiration from the past

So, angels of antiquity are utterly modern. One thing ultimately drove late antique people to be successful in transforming their way to be as individuals, their interaction with society, and, globally, how they dealt with their natural and cultural milieu: the creative attitude of rethinking old issues with new approaches. They stood up to face the challenges of their time which, unfortunately, sound strangely familiar— pandemics of plague, natural catastrophes such as earthquakes, floods or droughts, death in childbirth for women, famine for all, incessant wars and invasions leading to mass murders and migration phenomena, waste and destruction of natural resources, all of that topped up by prophecies that the world had evidently come to its end.

As a counterpart to the English pun how many angels can dance on the head of a pin? the French have the expression discuter du sexe des anges to convey the idea “to focus on useless aspects”. Point taken. But the currently increasing uncertainty and complexity in the relationship with ourselves, the others, and the planet would certainly be enough to make the angels weep. At the end of the day, we might also be well inspired to dedicate just a little bit more time to console them.

Images: All pictures used as illustrations taken by the author of the article, Basilica S. Vitale,

The Marie-Curie project “The making of Angels in Late Antiquity: Theology and Aesthetics (ALATA)” combines texts (in Ancient Greek, Coptic, and Syriac) and images (chiefly ancient mosaics) to research the origins of Christian angels’ figures. This perspective sheds a new light on the key- issue of representation: how can one make the invisible visible?

Dr Delphine Lauritzen was born in 1979. An alumna from the École Normale Supérieure (ENS) in Paris, she received her doctorate degree in Greek Studies from Sorbonne University (Paris-IV) in 2009. After a EURIAS Early Stage in Bologna and a Fernand-Braudel in Paris, she was awarded a MSCA grant to explore new paths in her field of expertise, literature and arts of late antiquity.

The ALATA project is implemented at Sorbonne University, in the Labex RESMED of the CNRS-joined research unit “UMR 8167-Orient et Méditerranée”, section “Monde Byzantin”. The high concentration of scholars who work on the various aspects of Byzantine civilisation combined with the many resources of Parisian academic life are great assets for the project.

This project has received funding from the European Union’s Horizon 2020 research and innovation programme under the Marie Skłodowska-Curie Individual Fellowship (MSCA- IF) grant agreement No.793760. 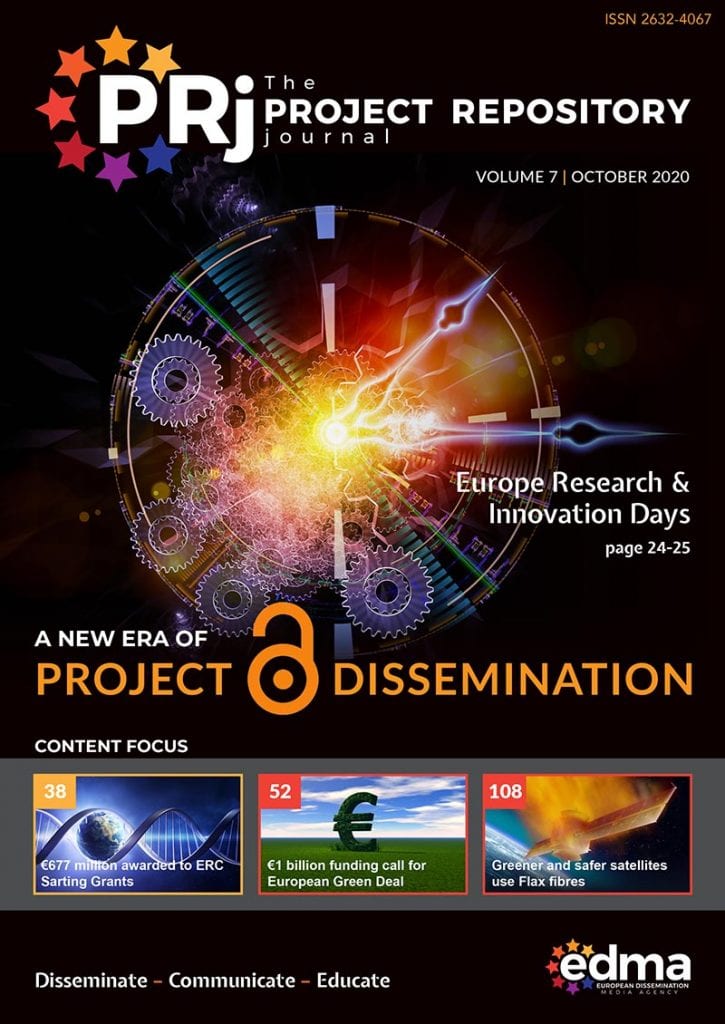 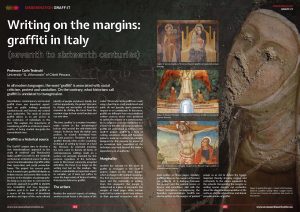 Writing on the margins: graffiti in Italy (seventh to sixteenth centuries) 7th May 2022 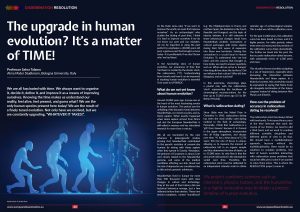