Correlative electron-photon spectroscopy without a laser

Correlative electron-photon spectroscopy without a laser

The interaction of free-electron beams with light and nanostructures has been used to investigate nanooptical excitations and design novel radiation sources. However, these two concepts have not yet been merged to form a single correlated electron-light characterisation technique. Combining electron-driven radiation sources with electron-probe spectroscopy techniques could have various advantages, namely, unravelling the dynamics by means of optical-pump and electron-probe techniques and exploring photon statistics, quantum jumps, and decoherence processes.

Here, we demonstrate our path toward the design and realisation of correlative electron-photon spectroscopy techniques without a laser. This approach, therefore, utilises electron-driven photon sources of tailored properties, allowing experiments to be performed at a much higher level of control and lower costs.

In recent years, 4-dimensional (4D) electron microscopy has emerged as a tool for exploring the dynamics of various physical and chemical interactions at a high spatio-temporal resolution (Flannigan and Zewail, 2012). This technique combines laser pumps and electron probes and utilises the photoemission process that enables the synchronisation between electron and optical pulses. The samples are excited by laser pulses, and electron beams probe the photo-induced excitations. Thus the laser excitations’ coherence features and the electron beams’ ability to ‘see’ the objects at the nanoscale define a platform for controlling the electronic and optical responses of the materials and probe their dynamics, where the time axis is defined by the delay between the electron probe and the optical pump.

Until now, only sub-picosecond dynamics have become accessible with 4D electron microscopy. The complicated quantum walk of the electron beam on the energy-momentum ladder specified by the laser excitation (Feist et al., 2015; Talebi and Lienau, 2019) has created a multitude of possibilities to investigate electron-light interactions at the extreme level, yet avoids a general and clear explanation of the dynamics of the sample itself.

We have recently proposed a technique that allows for correlative electron-photon investigations based on an inverse approach (Christopher et al., 2020). An electron-driven photon source (EDPHS) is used in interaction with electron beams to generate photons with tailored properties (Figure 1a). The generated photons are directed toward the sample, as well as the electron beam itself. Since electrons propagate slower than the velocity of the light, the delay between the photons and the electrons in a vacuum, upon arrival at the sample, is controlled by the distance (L) between the sample and the EDPHS (Figure 1b). Due to the retardation effects, it takes time for the EDPHS to emit light. This simply means that the EDPHS needs time to populate its domain of photonic wave functions that contributes to the radiation continuum. Due to this effect, in principle, both negative and positive delay regimes can become accessible. Various signals could be detected to probe the dynamics, namely, electron energy-loss (EEL) spectrum or the cathodoluminescence (CL) signal. Additionally, both the angular distribution of inelastic scattered electrons and the overall emitted photons could be detected; this could pave the way towards unravelling the quantum-path interference effects that happen due to the interference between electron-induced and photon-induced excitations.

The designing mechanisms employed for the EDPHS should provide the possibility to tailor the radiation properties on demand. This includes polarisation, intensity, and frequency of the generated light and the overall shape of the beam. Several mechanisms could be used to generate such light profiles upon electron-beam irradiation. The coherence state and the shape of the generated light are inherently linked to the materials properties, such as either an electron gas in a metal or collective excitons in a semiconductor that is excited. In particular, when collective electronic excitations such as plasmon polaritons are used, the spontaneous coherence and sensitivity of the plasmon frequency and their durations to the geometrical shape of their host medium allow the shape, frequency and polarisation of the generated light to be designed.

To design the EDPHS, various concepts based on metamaterials, holography, and photon sieves could be employed. We have recently used the latter technique to design and fabricate a photon sieve EDPHS structure that allows for either focusing the EDPHS light on the sample (Talebi et al., 2019) (Figure. 2a) or generating light with orbital angular momentum (van Nielen et al., 2020) (Figure. 2b). These EDPHS structures are fabricated by incorporating an irregular lattice of holes in a gold thin film deposited on a Si3N4 transmission electron microscopy membrane. The rather simple method of fabricating these structures enables a fabulous technique to tailor the properties of the generated light source on demand, e.g. by creating various EDPHS structures in a single membrane and switching between them (Figure 2a to d).

The EDPHS structures are inserted inside an electron microscope and positioned at a certain distance with respect to the sample (Figure 3a). A nanopositioner system is used to align the distance between the EDPHS and the sample with ultimately angstrom resolution, allowing the control of the dynamics at sub-femtosecond temporal resolutions. Our recent proof of concept experiments demonstrate that both the angle-resolved patterns (Figure 3b) and the spectra (Figure 3c) demonstrate many interference phenomena that could pave the way towards complementary approaches compared to 4D electron microscopy to unravel the photon statistics as an example. The EDPHS structure shown in Figure 2b has been used for obtaining the results shown in Figure 3. A quantum material, i.e. a thin flake of a transition metal dichalcogenides hosting room-temperature exciton polaritons, has been used for the sample.

Our results perfectly match with the milestones of the ERC Starting Grant project NanoBeam and are a significant step forward toward our aims for realising a few-photon spectroscopy technique favouring the electron-light interactions at the extreme level.

Figure 1: Correlative electron-photon spectroscopy without a laser. (a) An electron-driven photon source (EDPHS) generates light with tailored properties in interaction with electron beams. This light is focused on the sample and induces a polarisation in the materials that is further probed by the electron beam. (b) The delay between the EDPHS radiation and the electron beams is controlled by the distance between the EDPHS and the sample. The range of the delay is calculated for an electron at the kinetic energy of 30 keV.

Figure 2: Electron-driven photon sources for correlative electron-photon spectroscopy. (a) A single Si3N4 TEM membrane that includes a variety of different photon sieve structures that, in interaction with electron beams, generate (b) collimated light, (c) light with angular momentum, or (d) light with a specific symmetric pattern. Left column in panels (b) to (d) shows the SEM images of the EDPHS structures. The right column shows the detected angle-resolved pattern of detected photons at the filtered wavelength of 800 nm.

Figure 3: Developed correlative electron-photon spectroscopy technique that utilises an EDPHS structure. (a) An image of the setup that contains the nanopositioner and EDPHS, sample stage, and the CL collector (mirror). (b) Acquired angle-resolved pattern at the wavelength of 800 nm at depicted distances between the sample and the EDPHS. (c) Acquired spectra at selected distances, where the fluctuations of the spectrum versus distance are apparent.

Born in Iran, Dr Talebi received her award-winning doctorate in electrical engineering from the University of Tehran in 2011. She joined the Max Planck Institute in 2012 as an Alexander von Humboldt Research Fellow and received an ERC starting grant in 2018 to probe electron dynamics using electron microscopes. She has authored more than 50 peer-review articles and two patents.

The NanoBeam project is based at the Max Planck Institute for Solid State Research in Stuttgart, taking advantage of its stateof- the-art electron microscopy lab and computational resources. Collaboration partners include groups from Germany, France, the Netherlands, and beyond.

This project has received funding from the European Union’s Horizon 2020 research and innovation programme under grant agreement No. 831851. 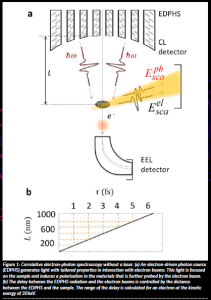 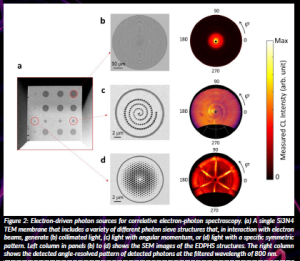 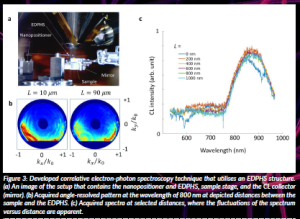 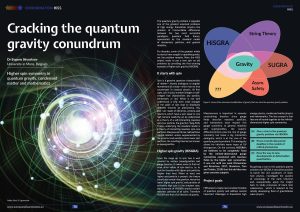