The twilight zone of the Earth’s carbon cycle

The twilight zone of the Earth’s carbon cycle

To what extent will the ocean mitigate the increase of atmospheric CO2 and associated global warming due to human activities? An accurate answer to this question requires that scientists explore the twilight zone of the ocean, a region extending between ~200 and 1,000 m depth that the sunlight barely penetrates.

This vast ecosystem, also known as the mesopelagic layer, plays a critical role in Earth’s climate. It acts as the gateway for long-term carbon storage in the deep ocean. The Twilight Zone also hosts a massive biomass of zooplankton and small fish that support higher trophic levels threatened by imminent fisheries exploitation. Predicting the evolution of the mesopelagic carbon cycle has, therefore, societal and economic benefits.

The OPERA project (Organic Particle Export, Remineralization and Advection in the North Atlantic mesopelagic layer) will shed light on the processes controlling the distribution and evolution of carbon in this ocean layer. In particular, OPERA aims to quantify mesopelagic carbon budgets and constrain their sources of uncertainty by exploiting synergies between new high-resolution observations and improved numerical models.

OPERA research focuses on the North Atlantic, a region that features wide latitudinal, seasonal and interannual variations in ocean dynamics. The relatively abundant observations of ocean circulation, biogeochemistry and ecosystem functioning make the North Atlantic an ideal testbed for our project.

The growth of phytoplankton, the microscopic algae that thrive in the sunlit surface ocean, produces ~50 petagrams of organic carbon (PgC, or 1015 gC) every year at a global scale. This amount is similar to the carbon fixation (photosynthesis) carried out by vegetation on land.

In the ocean, most of the newly produced organic carbon is rapidly recycled by the food web in the surface layer. However, around 20 per cent of it (~10 PgC per year) survives rapid decomposition and is exported to the mesopelagic zone. This flux, termed export production, comprises a wide variety of sinking and suspended detritus (collectively termed particulate organic carbon, POC) and dissolved molecules (dissolved organic carbon). Export production from the surface ocean feeds the mesopelagic ecosystem. In fact, around 90 per cent of the export production flux is intercepted and consumed by mesopelagic organisms. Only 10 per cent of it (that is, ~1 PgC) sinks deeper than 1,000 m, where carbon can be effectively sequestered for centuries.

Historically, the study of the mesopelagic layer has revolved around the concept of the biological carbon pump—the ensemble of biology-mediated processes that transfer organic carbon from the sunlit surface layer to the deep ocean (Boyd et al., 2019). Biological carbon pump studies have relied heavily on the determination of the vertical (or gravitational) POC flux, with the goal of understanding the factors that control its attenuation through the water column (Martin et al., 1987). In-situ measurements of the gravitational POC flux have revealed wide variability across ocean biomes and along the seasonal cycle (Figure 1). In addition, the rate of decrease of the POC flux along the vertical axis shows variations that are not fully understood. This large variability makes these processes difficult to observe and predict. Consequently, the grand numbers stated earlier suffer from a large uncertainty that must be reduced to improve climate projections.

Mesopelagic carbon budgets: a test for our understanding

A robust approach to the study of mesopelagic POC fluxes is the simultaneous quantification of both POC inputs (sources) and outputs (sinks) in order to close the POC budgets. This task has proven extremely challenging because of large measurement uncertainties and, on occasions, conceptually flawed budget calculations (Giering et al., 2014). The inability to balance POC budgets may also result from missing relevant budget terms. Recent studies indicate that POC input mechanisms other than gravitational particle sinking have been overlooked (Boyd et al., 2019). These mechanisms may include physical processes (e.g. the ‘mixed-layer carbon pump’ associated with vertical mixing, and water-mass sinking; see Figure 1) and biological processes (the so-called ‘active POC flux’ resulting from the vertical migrations of zooplankton and fish). Regarding the sinks, several studies pointed out that the metabolism, respiration and feeding behaviour of bacteria and zooplankton that consume and eventually degrade POC are poorly constrained.

Since ocean currents and mixing also transport dissolved substances and drifting particles, regional budgets must take into account both particle transformation within the domain and the transport of POC into and out of the study domain. Although the potential importance of horizontal POC transport was already postulated three decades ago (Martin et al., 1987), this process has been largely neglected until now, mostly because of the poor knowledge of the POC distribution. To reduce the uncertainty of mesopelagic POC budgets, we need innovative approaches that consider the three-dimensional structure of POC distribution and fluxes.

The particles that make up POC are extremely diverse. They span a wide range in size (from μm to cm) and appear in a myriad of shapes and compositions. The ensemble of these properties determines their sinking speed and, equally important, how easily they can be colonised by microbes and ultimately degraded to CO2. For simplicity, particles are usually partitioned into at least two classes: big particles (which sink at several tens or hundreds of metres per day) and small particles (with size ranging 1-100 μm), which are suspended or sink slowly (at less than 10 m per day). Because of their fast sinking speed, it is generally assumed that big particles carry most of the gravitational carbon flux. On the contrary, small particles, which represent around 90 per cent of the mesopelagic POC stock, are assumed to contribute little to the sinking flux. But is this simple picture accurate enough?

Contrary to expectations, several recent studies show that small particles can dominate the total POC vertical flux during some seasons (e.g. Alonso-González et al., 2010), pointing to the importance of physical transport processes other than gravitational sinking. Other studies pointed out that big particles (mostly large aggregates of phytoplankton cells and the faecal pellets of zooplankton) are actively fragmented by biological activity in the mesopelagic, supplying smaller particles on which microbes can thrive. Thus, better accounting for small particle fluxes will help balance mesopelagic POC budgets.

Many recent breakthroughs in our understanding of mesopelagic particle dynamics have resulted from the widespread deployment of robotic observation platforms (seagliders, drifting Argo floats) fitted with optical and chemical sensors and, more recently, cameras. Unlike traditional observation techniques, these instruments allow year-round observations of particles in the top 1,000 m of the ocean (Figure 1) over extended regions at a reduced cost. Measurements of small particles are particularly accurate and are used in OPERA to examine POC budgets at high spatiotemporal resolution.

Doing the maths: are models getting POC right?

Despite recent advances in observation techniques, it is technically impossible to fully observe particle transformations and transports at all the relevant spatiotemporal scales. The best tools to gain a detailed understanding of mesopelagic POC budgets are ocean biogeochemistry models informed by the available observations. However, numerical models can only afford a simplified representation of the different particle types and their transformation processes, as they are limited by incomplete mechanistic knowledge and computing power. How existing knowledge is distilled into simplified model equations has a critical influence on the outcomes of model simulations.

Most state-of-the-art biogeochemical models, such as those used to inform the International Panel of Climate Change (IPCC) reports, were designed to capture the gravitational POC flux and fitted to a small amount of in-situ measurements. A recent study (Aumont et al., 2017) showed that these models tend to grossly underestimate POC concentration in the ocean interior because all the POC is rapidly flushed to the seafloor. In that study, a new mathematical representation for POC was introduced. This new scheme, based on the concept of the reactivity continuum, assumes that POC is made up of a mixture of particles with different degradation speeds, which is supported by experimental data. This allows for the accumulation of the less reactive fractions of the small POC in the mesopelagic layer, dramatically improving the fit to observations. The ability to simulate realistic POC fields enables examining how POC transports (both vertical and horizontal) shape POC budgets.

Hypotheses and objectives of OPERA

Improving our understanding of biogeochemical transformations and physical transport of organic particles in the mesopelagic is crucial to understanding and predicting the fate of carbon exported from the surface of the ocean.

The main hypothesis of the OPERA project is that small POC accounts for a major fraction of the carbon fluxes that contribute to mesopelagic carbon budgets. In particular, we hypothesise that advection of small POC makes a sizeable contribution to mesopelagic carbon budgets by redistributing particles from source to sink areas in the global ocean.

To test our hypotheses, we are conducting numerical simulations with the ocean dynamics model NEMO4 coupled with the biogeochemical model PISCESv2, which includes the latest improvement in POC-related processes. Sensitivity experiments are performed in which we scan different values of a set of model parameters to quantify model uncertainty. We will evaluate how realistic our simulations are by comparing our results to the latest observational datasets, including ocean colour remote sensing and biogeochemical-Argo floats. The North Atlantic Ocean is our focus as this is a thoroughly observed region that presents a large variety of oceanic biomes and subregions with contrasting biogeochemical regimes.

Finally, the ocean dynamics of the North Atlantic are characterised by year-to-year changes due to the variability of the atmospheric forcing. Those variations are likely to be reflected in the POC budgets. In particular, the role of the advection and of the vertical carbon fluxes are expected to change from one year to the next. In OPERA, we will document for the first time the year-to-year variability of mesopelagic POC at the basin scale and investigate the main drivers of this variability.

The oceans’ mesopelagic layer or ‘Twilight Zone’ (200–1,000 m) acts as the gateway for long-term storage of atmospheric carbon in the deep ocean, mitigating global warming due to human carbon emissions. In the OPERA project, we will perform comprehensive model simulations, constrained by observations, to better understand and quantify mesopelagic carbon budgets (and their uncertainty) in the North Atlantic Ocean.

Dr Martí Galí investigates the interaction between plankton and climate. In 2018 he joined the Barcelona Supercomputing Center (BSC) to study the fate of plankton-produced organic carbon as it sinks through the oceans’ twilight zone.

Dr Yohan Ruprich-Robert is an expert in climate dynamics and predictability. At BSC, he focuses on the origins and impacts of the Atlantic variability.

The OPERA project is funded by Spain through the Ministerio de Ciencia, Innovación y Universidades (PID2019-107952GA-I00). 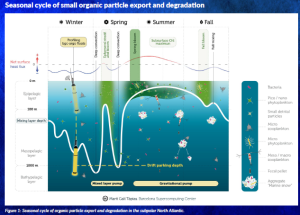 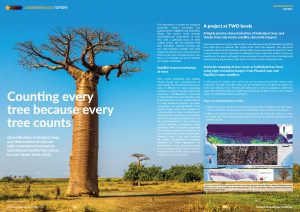 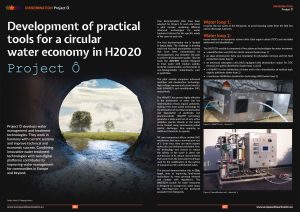