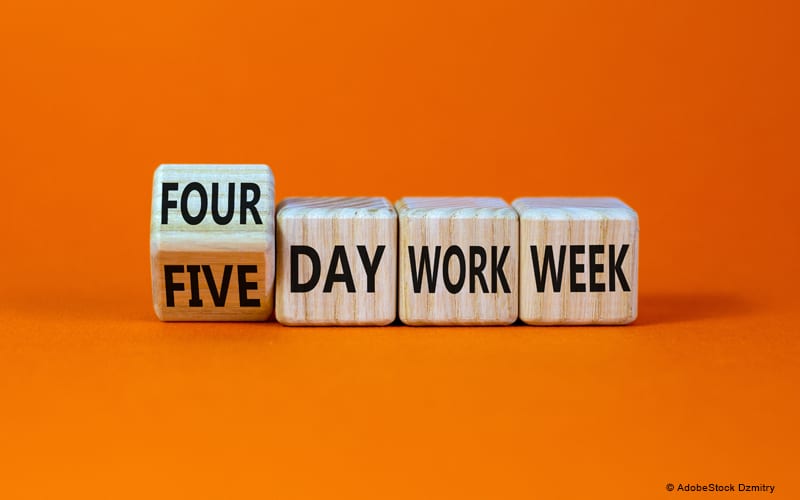 Do you feel a bit sluggish after weekends? Would taking Friday or Monday off do the trick? Researchers from UK think tank Autonomy and the non-profit Association for Sustainability and Democracy (Alda) tend to agree in their joint report. They claim that 40-hour workweeks aren’t necessary and are even harmful to our well-being.

Getting used to a new way of working

The report presents the results of a large-scale 4-day-week trial held in Iceland between 2015 and 2019. More than 1 per cent (2,500) of the country’s working population participated in the pilot programme. Public sector employees cut their working hours by about 5 hours a week, or 35–36 hours instead of 40, with no reduction in overall pay. Findings showed that productivity and services remained the same or improved across most settings. Well-being improved considerably, from stress and burnout to health and work-life balance.

Daiga Kamerade, associate professor of work and well-being at the United Kingdom’s University of Salford, told ‘CNN’ that researching the public sector with potentially better working conditions than the private domain could have influenced the outcomes. “Reducing the working week from 40 to 35-36 hours is a first step towards a shorter working week, we need similar large-scale trials that push this reduction further — for example, looking at a true four days working week of 32 hours or less.”

Will 4-day workweeks become a thing?

Unsurprisingly, most participants wanted to carry on with the 4-day arrangement. Today, 86 per cent of Iceland’s workforce are working less hours or earning the right to shorten their hours.

“Recognition of the coming impact of automation and technological change on our working lives, alongside a burgeoning desire to spend less time tied up in work has put a reduction in working hours firmly on the policy-making table,” concluded the report. “The ongoing Covid pandemic has only accelerated this, fuelling rapid transitions to remote work, and unexpected increases in free time as workers have abandoned their commutes or found themselves placed on reduced working hours. It has become more and more clear that few wish to return to pre-pandemic working conditions: a desire for a reduced working week is set to define ‘the new normal’.”

Could the 4-day week be the start of a new trend as we continue to adapt to the impact of COVID-19 and Industry 4.0? Ask your higher-ups what they think. You might want to show them this article first!

This post TRENDING SCIENCE: Is it time to shorten the 40-hour workweek? was originally published on CORDIS News | European Commission.

The European Research Council (ERC) announced today via Twitter that the submission platform for the 2022 Starting Grant is now open. Researchers of any nationality and within any field of…