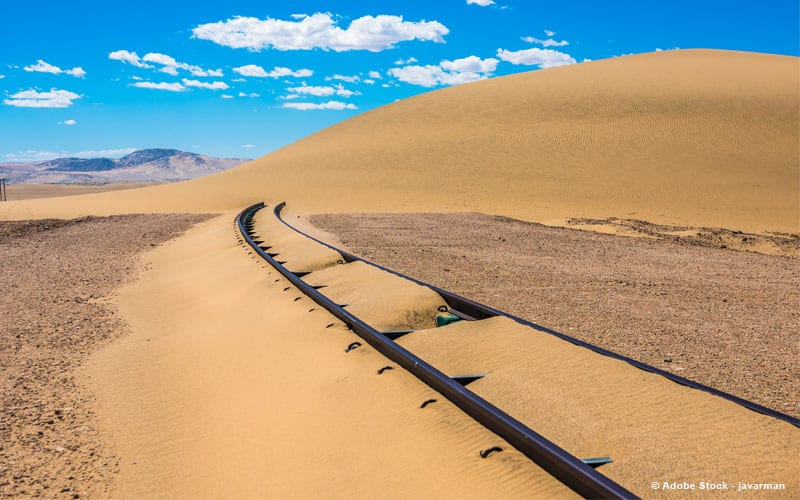 The most serious hazard from windblown sand is train derailment, so trains typically travel at a reduced speed on windy days as a precaution. ‘Fewer trains are passing per hour,’ said Dr Lorenzo Raffaele, a wind engineer at the von Karman Institute for Fluid Dynamics in Sint-Genesius-Rode, Belgium. ‘This causes a loss of capacity for the railway, which implies a loss of money.’

Several techniques can be used to protect infrastructure from windblown sand. Structures such as barriers or ditches can be installed to trap sand. On railways, elevating the rails can help, where the gap underneath can accelerate wind flow and clear sand. However, measures are typically not as efficient as they could be. That’s partly because they are still largely designed by trial-and-error, where a solution is chosen based on intuition and tested in the field once a railway has been built, which is costly and can take a long time.

‘A more rigorous approach is required in order to avoid problems (such as construction delays),’ said Dr Luca Bruno, associate professor of structural engineering at the Politecnico di Torino in Italy.

Although there are currently ways to assess the performance of sand mitigation measures, they often don’t meet the needs of infrastructure designers. Existing computer simulations, for example, typically only model patterns of wind flow without incorporating the behaviour of the sand itself and more advanced models are still in their infancy. They can therefore only give a rough estimate of a measure’s effectiveness.

Wind tunnel tests can also be carried out to reproduce the behaviour of windblown sand. However, only a few facilities worldwide allow experiments with sand since it spreads everywhere and can damage equipment. In addition, sand grains should be reduced in size in experiments since models of proposed measures are scaled down, which isn’t possible since it would become dust, which behaves completely differently. It’s therefore hard to extrapolate from the results to determine how they would work at full scale. ‘This is a big limitation of wind tunnel tests,’ said Dr Raffaele.

Dr Bruno and his colleagues are therefore aiming to come up with new techniques to assess sand hazards, while also conceiving new sand mitigation measures and novel ways to assess their performance, as part of the SMaRT project. They are focussing on mitigating problems caused by sand near railways. ‘We were stimulated at the beginning by a practical need expressed by the industry,’ said Dr Bruno.

Members of the team developed a computer simulation that can help gauge the performance of a sand mitigation measure before railway construction. Their simulation takes into account both air flow and the movement of sand, and accounts for different phenomena such as erosion, sedimentation and sand avalanches, simulating their effect around the complicated shape of a railway.

‘We are able to predict how the wind, the sand and the railway behave under real world conditions,’ said Dr Bruno.

‘We are able to predict how the wind, the sand and the railway behave under real world conditions.’

Their computer simulation is now being used to develop a hybrid approach for assessing the performance of sand mitigation measures as part of another project called HyPer SMM. Dr Raffaele and his team are improving the model by incorporating measurements from wind tunnel tests with sand.

So far, the team has carried out initial wind tunnel tests to characterise how sand moves at different wind speeds, starting with a flat sand bed. They measured the sand concentration in the air and the speed of individual sand grains, for example. Their results were used to tune the computer model.

Next, they plan to conduct wind tunnel experiments with sand and scaled-down sand mitigation measures, focussing on barrier or ditch solutions since they are the most widely used. Measurements taken in the wind tunnel when a mitigation measure is introduced will be compared to those obtained from the simulation for the same measure at reduced scale. Once the two methods give the same results, the model can be validated. It can then be applied to test the mitigation measure at full scale, getting around the issue with scaling up wind tunnel results.

Dr Raffaele and his colleagues plan to make all their results openly available. Companies and universities will be able to validate their own computational simulations by using their wind tunnel measurements, for example. Or the results from a validated computer model could be used to help predict the efficiency of a sand mitigation measure before infrastructure is built, using information about local environmental conditions, such as wind speed and direction and sand grain sizes.

Dr Raffaele expects their hybrid approach to primarily be used by companies building new railways or expanding existing networks in the Middle East, North Africa and China. But it could also be of interest in coastal areas in Europe, where windstorms often cause sand to accumulate around buildings and infrastructure in small villages. A tramline in northern Belgium, for example, is often disrupted by sand on the tracks, such as during a storm last September. ‘They had to clean everything for several days,’ said Dr Raffaele.

In addition to new approaches for assessing sand mitigation measures, more effective measures are also needed. The SMaRT project team has developed a new type of barrier with a curved projection at the top, designed to be placed between a sandy area and a railway. It modifies wind flow and reduces wind speed so that sand grains fall down. Sand is therefore trapped away from a railway, which would cut down on costs since train traffic wouldn’t need to be stopped to clear away sand.

‘Workers would sometimes need to remove sand sedimented around the barrier but this maintenance is easier (since it is) far from the railway,’ said Dr Bruno.

They also conceived a second sand mitigation measure, which is in the process of being patented. It is intended to be placed close to a railway and is designed to harness the wind’s energy in order to disperse sand grains. Dr Bruno says that ideally both measures would be used together. The barrier would stop most of the sand while the second measure would disperse the remaining grains.

The team has also been looking at how advanced technology can improve site assessment of mitigation measures. During field tests in the Namibian desert, they used some of these techniques to evaluate the performance of a special track system that had been installed to help mitigate sand on a railway. Typically, assessments are done by using anemometers to measure wind speed and a device called a sand trap to assess how much sand is transported by wind. However, in this case, they used a laser scanner to measure sedimented sand and piezoelectric sensors to measure sand flux. ‘These measurements are much more precise than the sand traps adopted up to now,’ said Dr Bruno.

Using this new technology, the team was able to develop a new method that can be adapted to assess the performance of any type of sand mitigation measure in the field. Although their computational model will now help assess measures at the initial design stage, field tests will remain important at the end. ‘They are intended to check if everything is fine before a railway line is in service,’ said Dr Bruno.‘Measurements tools and techniques must therefore be precise, reliable and robust.’ 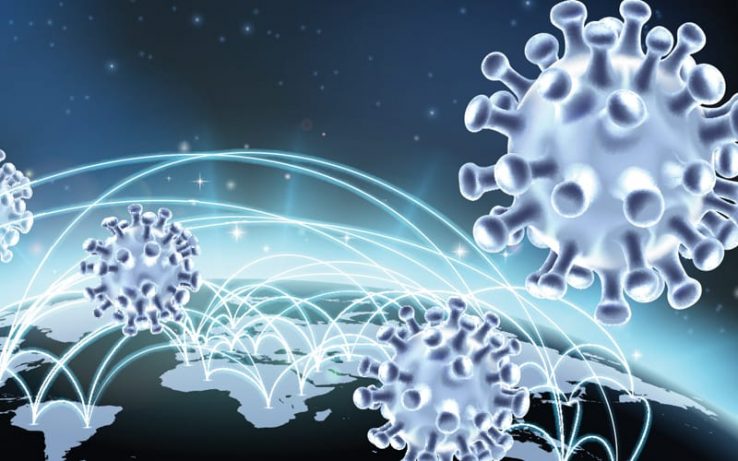 Commission invests €128 million to address the coronavirus pandemic and its effects.

The Commission is supporting 23 new research projects with a total of €128 million to address the continuing coronavirus pandemic and its effects. The 23 projects involve 344 research teams… 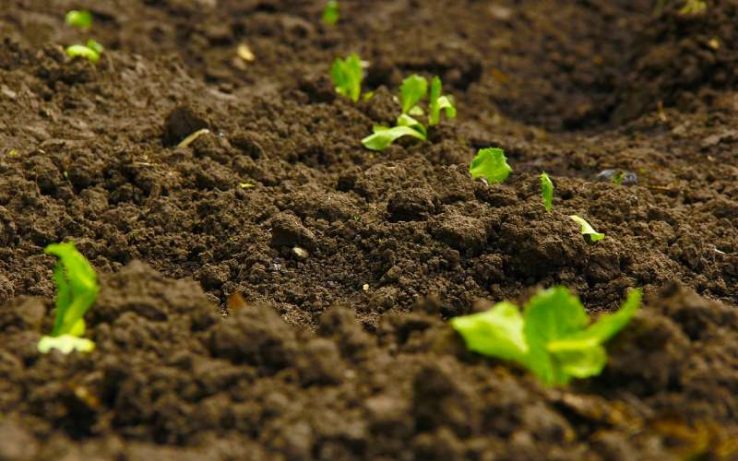