Results of and lessons learned from TARGET

Results of and lessons learned from TARGET

The project TARGET—Taking a Reflexive approach to Gender Equality for institutional Transformation—supported seven institutions in developing and implementing a reflexive gender equality policy.

TARGET did not only aim at the formal adoption of a gender equality policy but emphasised an iterative and reflexive process towards equality at the institutional level and the establishment of a community of practice (CoP) for gender equality within the institution. The approach is based on a threedimensional gender equality concept. The gender equality plan (GEP) aims to achieve a gender balance in all fields and decision-making, abolishing structural barriers for women’s careers and integrating the gender dimension in research content and teaching. Furthermore, TARGET assumes that actual change results from increased institutional willingness and capacity to identify, reflect on and address gender bias in a sustained way.

TARGET partners followed a cyclical, evidence-based and reflexive approach when developing their GEP. The process started with an audit to analyse the status quo regarding gender equality. The audit referred to gender-disaggregated administrative data (e.g. regarding human resources, students, research output and teaching) but considered strategic documents, processes, existing policies, and structures too. Most implementing partners have been successful in linking the GEP to ongoing institutional reforms or restructuring processes (e.g. to digitalisation processes, establishment of a new human resources policy, revision of the mission strategy). In doing so, gender equality became mainstreamed in the institution instead of being positioned in a niche. This has also been supported by the CoP, which comprised a broad range of internal and/or external stakeholders, not only gender experts. Based on the audit, gender equality priorities and objectives have been defined. These priorities and objectives, as well as concrete policies, have been integrated into the GEP. In addition, specific monitoring has been developed, which contains context indicators and information about policy implementation (input and output indicators). Monitoring results served as the starting point for a reflection of developments, successes and failures in the context of gender equality.

TARGET provided a specific tool for each of these steps (Gender Equality Audit Tool, Guidelines for the development of a targeted GEP, Monitoring Tool and Guidelines for Self-Assessment—available via www.gendertarget.eu). Supporting partners provided assistance in tailoring the tools to the institution’s specific needs. This tailored support was essential for two reasons: (1) implementing partners formulated a clear commitment to gender equality but did not have specific experience in the field prior to TARGET; and (2) implementing partners are located in countries that have been classified as rather inactive regarding gender equality in R&I (e.g. Lipinsky 2014; Wroblewski 2021).

TARGET successfully initiated sustainable institutional change in seven institutions by implementing GEPs. Dimensions illustrating this are: (1) the establishment of structures for gender equality; (2) the establishment of steering instruments that address research performing organisations (RPOs); and (3) the bottom-up influence on the national gender equality discourse in R&I.

Establishment of structures for gender equality

Establishment of steering instruments by RFOs and RMEI

TARGET partners developed a GEP following an evidence-based, cyclical and reflexive approach. Such an approach is demanding as it requires time, financial and personnel resources, top-down commitment, support from an internal CoP and advice from facilitators—to a varying degree depending on management support and political context. The successful implementation of TARGET has been facilitated by linking gender equality with other important institutional strategies, policies or projects. This supported the acceptance of gender equality goals or initiatives in the organisation as well as the active involvement of top and middle management. In some cases, TARGET implementation was supported by an emerging national discourse about gender equality in R&I (like in Greece)—a development which has been strengthened by the GEP requirement for Horizon Europe applications formulated by the European Commission (European Union, 2021).

However, implementing partners faced resistance to change within the organisation. Resistance can take several forms, from denying the problem—“there is not such an issue as gender discrimination in our organisation”—to formally agreeing to implement change without really supporting it. “Slowing down the process” can be a strategy for both the organisational governance level—which is constantly resetting priorities without including gender in the most pressing ones—as well as at the operational level, which sees more complications than benefits in implementing gender balance-oriented actions. Moreover, these kinds of resistances can be catalysed in countries where the organisation’s external context is very traditional and resistant to gender equality. All implementing partners are discussing lessons learnt and how to sustain gender equality policies and structures in the future.

TARGET experiences clearly show that it is difficult for implementing institutions to compensate for the lack of national policy discourse on gender equality in R&I. It also becomes evident that there is a need for a policy discourse between the European Union and member states to arrive at a common understanding of gender equality which goes beyond women’s representation, provides arguments to engage in gender equality and establishes criteria for good practices. Hence, not only institutions but also countries that are starting their journey and engage in gender equality for the first time need support. The new GEP requirement in Horizon Europe may provide a starting point for such a policy discourse. The extent to which this potential will be exploited depends on the commitment of European and national stakeholders to pursue gender equality in R&I and thus contribute to the objectives of the European Research Area (ERA). Currently, a window of opportunity is open, inviting all relevant stakeholders at European, national, regional, and institutional levels to take action towards a cultural change in RPOs and RFOs.

TARGET aims to contribute to advancing gender equality in research and innovation by supporting a reflexive gender equality policy in seven Gender Equality Innovating Institutions (GEIIs) in the Mediterranean basin—including three research performing organisations and three research funding organisations, and a network of universities. Each institution developed and implemented a targeted Gender Equality Plan and established a Community of Practice.

Angela Wroblewski is a senior researcher at the Institute for Advanced Studies. She is a trained sociologist and holds a PhD from the University of Vienna. Her research focuses on gender (in)equality in academia, evaluation and monitoring of gender equality policies. Currently, she coordinates the H2020 project TARGET and has been involved in the H2020 project GENDERACTION where she was responsible for the monitoring of the implementation of ERA Roadmap Priority 4 in member states.

This project has received funding from the European Research Council (ERC) under the European Union’s Horizon 2020 research and innovation programme under grant agreement No. 741672. 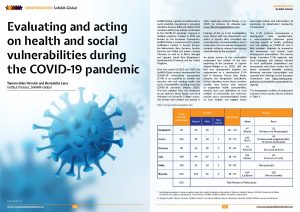