The SCORE project: finding Earth 2.0 Does life exist elsewhere in the Universe?

The SCORE project: finding Earth 2.0 Does life exist elsewhere in the Universe?

It’s a question that has probably entered the mind of every human being on the planet: a question so important to us that, over the ages, philosophers have tried to give reasonable answers in the absence of any possible scientific validation. However, with the discovery nearly three decades ago of the first planets orbiting other stars than the Sun, the hope that humans will one day have an answer to this fundamental question is becoming a reality.

The search for life elsewhere in the Universe is one of today’s most significant challenges in astrophysics. The community has traced the roadmap to reach this goal (European Space Agency, 2010; NASA, 2010; National Academies of Sciences, Engineering, and Medicine, 2018), the goals of which are to:

NASA and ESA are already planning space missions such as HabEx (NASA, 2019a) and LUVOIR (NASA, 2019b) that should be able to reach the second and third goals listed. However, the first point must still be addressed.

When detecting Earth-like planets orbiting in the HZ of Sun-like stars, only the transit and microlensing techniques are sensitive enough to resolve the tiny signature induced by those worlds. The first method requires the detection of the planet passing between us and its host star while orbiting around it. The second method requires that a planetary system, drifting in space, passes in front of a background star from our point of view on Earth. Both events are extremely rare and thus have nearly zero chance of happening for the approximately 1 000 to 2 000 stars located closer than 50 light-years from the Sun. This limit of 50 light-years is required to measure and characterise the atmosphere of those planets in the search for atmospheric life signatures (the second and third goals listed previously). This limit comes from two facts:

Considering that the transit and microlensing techniques won’t be able to find HZ Earth-like planets orbiting around stars closer than 50 light-years, we must rely on other detection techniques. The most promising one is the radial-velocity (RV) method. This technique measures the velocity of stars and detects planets by the tiny variation in velocity they induce on their host star due to gravitational interaction.

Although the current generation of instruments used to measure the RV of stars can reach the precision of a dozen centimetres per second, which corresponds to the effect Earth induces on the Sun, perturbing systematics limit the precision of current observations to the metre-per-second level. Those perturbing effects are known to come from the instruments we are using, from the stars we are observing and from the effect of the Earth’s atmosphere on the stellar light that we measure. We, therefore, need to get a better understanding of these different types of perturbing signals to model them properly and mitigate their impact if we want to find HZ Earth-like planets orbiting the closest stars to our Sun. This is precisely the goal of the ERC-funded SCORE project.

The SCORE project, a pathfinder to the detection of HZ Earth-like planets using the RV technique

Getting a better understanding of the different perturbing signals in RV measurements requires exquisite data to separate the effect of each signal individually. The SCORE project relies on the unique data obtained by two solar telescopes connected to some of the best radial-velocity instruments (Dumusque et al., 2021), which observe the Sun every possible day. The obtained data can be seen in Figure 1, where a comparison between the ‘noise’ seen in those measurements and the tiny signal Earth induces on our Sun directly illustrates the challenging problem of detecting other Earths using the RV technique.

For our goal, observing the Sun presents many advantages over observing stars.

Now that we have those exquisite solar data, the SCORE project can start investigating several data-driven and physically-driven paths to solve the complex problem of perturbing signals in RV.

To understand those different paths, we need first to describe how stellar RVs are measured. The spectrum of solar-type stars presents thousands of absorption lines due to the presence of many chemical species in the outermost layers of stars from where the light we measure is emitted. If the star moves towards or away from us, the Doppler-Fizeau physical effect will induce all the spectral lines to shift towards blue or red wavelengths, respectively. Measuring the shift of those spectral lines with time gives us the RV of the star and indirectly the presence of a planet if this RV varies periodically.

From the preceding description, we conclude that the presence of a planet will affect all the spectral lines in the same way, which is not the case for the different perturbing signals. In addition, RV measurements taken at a telescope (on Earth) will have an RV with respect to a star we are observing as Earth will move towards or away from it along its revolution around the Sun. The corresponding RV variation will have a period of a year and an amplitude of dozens of kilometres per second. This implies that the stellar spectra of a given star will be significantly blue and redshifted over a year, which will not be the case for either absorption spectral lines formed in Earth’s atmosphere or instrumental signals that do not move in the rest-frame of the Earth. Those two effects can be used to separate planetary from perturbing signals using data-driven approaches to look for differential effects between spectral lines (Cretignier, Dumusque and Pepe, 2021; Cretignier et al., 2022).

On the physically-driven side, we can understand the physics behind the different perturbing signals induced by the stars we are observing. Rotating sunspots on the solar surface create a perturbing signal because the lower emitted flux from spots breaks the symmetry of the rotating sun. As the contrast of spots changes with wavelength, the RV signal induced by spots in the visible is much larger than the one in the near-infrared. In addition, spots suppress the convection locally at the stellar surface. As the velocity of convection changes with height in the solar atmosphere, spectral lines formed at different heights will be affected differently by the presence of spots (Dumusque, Boisse and Santos, 2014; Cretignier et al., 2020).

Here, we only describe a few paths explored within the SCORE project, but our goal is to investigate all major perturbing contributions to RV measurements and find techniques to mitigate their impact.

The RV technique is the only method currently capable of finding HZ Earth-like planets orbiting nearby stars. However, due to different perturbations coming from the instruments we are using, the stars we are observing, and the effect of the Earth’s atmosphere, finding such planets is not yet possible.

The goal of the SCORE project, thanks to exquisite solar data, is to understand better the major noise contributions in RV measurements and develop mitigation techniques based on data-driven or physically-driven approaches. This is the only path viable today to detect those other Earths in the near future.

If successful, the SCORE project will deliver techniques, tools and strategies to significantly increase the sensitivity of RV measurements, ultimately paving the way to the detection of other Earths. Future space missions will then measure their reflected light and characterise their atmosphere in the search for signatures of life elsewhere in the Universe.

The goal of the SCORE project is to enable the detection of other Earths orbiting bright, close-by Sun-like stars for which future ground and space-based missions will be able to characterise their atmosphere in the search for signatures of life elsewhere in the Universe.

The SCORE project is based at the Astronomy Department of the University of Geneva, which is part of the National Centre for Competence in Research “PlanetS”, funded by the Swiss National Science Foundation and regrouping the expertise from the Universities of Geneva, Bern, Zurich and the Swiss Federal Polytechnic School (ETH) Zurich on all research related to exoplanets.

This project has received funding from the European Research Council (ERC) under the European Union’s Horizon 2020 research and innovation programme under grant agreement No. 851555.

Figure 1: Radial velocity of the Sun as measured by the solar telescopes feeding the HARPS and HARPS-N instruments located in La Silla, Chile and La Palma, Spain, respectively. Those measurements, taken nearly every day with an exquisite precision, corresponds to the best data available today to study all the different perturbations affecting the radial-velocity method. As we can see, those observations present a ‘noise’ that is 50 times larger than the radial-velocity signal Earth induces on our Sun. The SCORE project aims at understanding better those different perturbations and finding mitigation techniques that will enable the detection of other Earths in the near future. 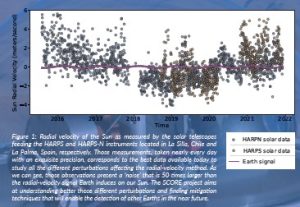 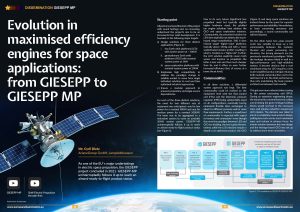