As the world’s population will increase by approximately 1.9 billion people towards 2050 ( HYDE, 2016 & UN WPP 2019)so will the demand for food. The agricultural sector faces the challengeof increasing its production without the availability of extra land, water and other natural resources.

“Farmers have a very important role for our society because we expect the demand for food to increase by 70 per cent by 2050.”
– Clemens Duijnisveld, Product Manager at Lely.

The impact of farming on the environment is also coming under increasing scrutiny, and regulations are becoming stricter. Dairy farmers, for example, need to increase their milk production while improving animal welfare and reducing their ecological footprint. Farmers need to adapt to be able to keep their so- called licence to produce. Adapting to the circular economy is becoming increasingly important, closing the cycle of nutrients, particularly reducing manure emissions.

The European Union (EU) is one of the world’s leading producers, consumers, and traders of bovine meat and dairy products. The sector provides employment and contributes to territorial vitality, especially in marginal or vulnerable regions. It provides environmental goods such as biodiversity preservation. And many EU beef meat and dairy products are regarded as high-quality products that are protected by EU schemes.

Around 3.6 million farms belong to the cattle sector, representing 17 per cent of all EU farms. In merely economic terms, these holdings contribute onethird to the total EU agricultural gross production value, utilise one-third of EU agricultural land and employ one-quarter of the EU agricultural labour force. In the near future, a further increase in milk and bovine meat supply can be expected.

The current challenges of the dairy industry

It is natural for cows to be outside. However, the weather conditions create the need for shelter. More than 90 per cent of the dairy cattle are housed in barns in the main EU dairy-producing countries. In these barns, dairy cattle can move freely, enjoy good quality feed and water and proper cubicles in which the cows lay down to rest. Many of these barns have the ability for the cows to go outside for grazing in case weather conditions are good.

Due to the free movement of the cows in the barn, faeces and urine cannot be prevented from coming together. This leads to the biological forming of ammonia emissions (NH3). These emissions could lead to ammonia deposition in natural areas, reducing the biodiversity of various flora and fauna within these fragile natural areas. This issue is critical in countries such as the Netherlands, Germany, Belgium and North Ireland; influenced by EU regulation, it is expected that more countries will increasingly focus on this aspect.

Animal manure (the combination of faeces and urine) has always been a valuable raw material for farmers to keep soil fertile and provide nutrients for crops. However, as the separation of the various minerals within the manure is challenging, it is nearly impossible to fertilise the needs of the crops in an optimum way. The minerals, which are leaving the farm via milk, meat or emissions, are compensated by the import of artificial fertilisers, starting the process all over again.

Lower emissions and reuse of ammonia

Lely Sphere, is a circular manure-handling system that reduces the undesirable emission of ammonia from the barn by at least 70 per cent, converts the captured ammonia into circular nitrogen fertiliser(s) and separates the urine and faeces. Instead of manure, dairy farmers can now choose from three types of fertilisers for optimal crop growth. The conversion of ammonia into circular nitrogen fertiliser significantly reduces the import of artificial fertiliser, and so improving the mineral loop on the dairy farm.

The reduction in ammonia emissions achieved by the Lely Sphere system limits the negative impact on the environment by significantly reducing the deposition of ammonia in fragile surrounding nature areas. It also helps make farming operations more circular. Lely Sphere converts ammonia into another nitrogen compound, stored in a silo as liquid, namely ammonium, which can be used as fertiliser.

Practical tests have shown that 10 to 20 kg nitrogen per cow per year can be ‘harvested’ from ammonia emissions. This gives farmers access to a separate stream of nitrogen nutrients that can be used alongside the separated animal urine and faeces. The animal urine contains less mineral nitrogen but is still rich in other nutrients like potassium, while the organic nitrogen and phosphate are mainly stored in the faeces. By alternating these three streams of nutrients according to the needs of the soil, farmers can give their crops what they require and improve the quality of the soil. In addition, farmers do not need to buy so much artificial fertiliser.

Safer and healthier for people and animals

Liquid manure storages are anaerobic systems, meaning without oxygen. As organic material in the manure breaks down, the lack of oxygen in the manure liquid promotes hydrogen sulphide, methane and other gas formation. Hydrogen sulphide exposure results in significant health problems. Methane is a fire/explosion hazard when it reaches flammable limits of 5 to 15 per cent by volume. These dangers are present for both humans and animals in the barn.

Lely Sphere’s modified slatted floor and ventilation system prevent manure gases from entering the barn, so the system improves the climate in the barn. Space where the cows live and the working environment of the farmer and the employees become safer, healthier and more pleasant. Air in the barn is extracted via the manure pit, so the natural ventilation in the barn is maintained. The system is therefore also suitable for farmers with cows that graze outside. All gases are extracted from the manure pits below the barn. This prevents harmful gases from building up and reaching a high concentration.

Lely Sphere: a combination of technologies

The results achieved with the Lely Sphere system are due to two effects. The first effect is to limit the formation of ammonia in the barn with technology designed for this purpose. The second effect is to remove ammonia from manure by means of a unit that extracts air from the manure pit and the barn and captures the ammonia contained in it.

Lely Sphere is a combination of various technologies: a modified barn floor, a manure robot, a unit that extracts air from the manure pit and the barn and converts the ammonia it contains into circular fertiliser, and a silo to store the circular fertiliser. These four elements complement each other.

The surface of the modified floor is perforated to separate faeces from urine. Urine passes through the perforations, while the faeces remain on the floor, where the manure robot collects it. Faeces and urine barely come into contact with each other on the floor. This is the first step in reducing ammonia emissions, as ammonia is created when faeces and urine are mixed. An enzyme in the faeces promotes a chemical reaction that changes a nitrogen compound in the urine (urea) into ammonia.

Ammonia can form under the floor in the manure pit, but it is extracted by the N-Capture, the third element of the system. The N-Capture sucks the air from the pit through a filtering system. The ammonia from the extracted air is captured and converted into another nitrogen compound (ammonium), which can be used as a substitute for chemical fertiliser.

Benefits in the EU

In the EU, the so-called national NECs (national emissions ceilings) apply to some emission substances like ammonia (NH3). This may not be exceeded for each substance for which a ceiling applies. The reuse of ammonia nitrogen as a substitute for artificial fertiliser on dairy farms reflects the ambitions set out in the European Commission’s Circular Economy Action Plan. It is also in line with the Farm to Fork strategy to stimulate the use of organic and waste- based fertilisers.

This project concerns the reuse of nitrogen from ammonia. Further processing of manure allows nutrients to be used even more efficiently and specifically in the future for growing crops and improving soil. Dairy farmers can exploit precision fertilisation and robotisation technology to refine fertilisation further. Light, autonomous vehicles can apply small doses of fertiliser at frequent intervals. For example, Lely is working on the development of Lely Exos (see figure 5), an autonomous vehicle that harvests fresh grass and feeds it to livestock. This vehicle can also apply small doses of liquid fertilisers produced by the Lely Sphere to the grassland instantly after mowing.

The Lely Sphere is currently in validation on multiple Lely test farms in the EU. For the RAV certification, the ammonia emission is monitored for an entire year on four dairy farms in the Netherlands with a Lely Sphere system. All measurements needed to receive the official approval are almost finished. On average, measurements show that the Lely Sphere reduces the ammonia levels in the barn from 13kg NH3/cow/year to 4 kg NH3/cow/year, a reduction of 70 per cent. We will focus on scaling up within the Netherlands and start initial installations for gaining approval in other EU countries in the upcoming period.

Lely is an innovative R&D intensive company that works with various international industry partners such as Datamole, Festo, and knowledge institutions such as Wageningen University, TU Eindhoven and Utrecht University. Therefore, the company participates in several research projects, which are part of the EAFRD, Horizon 2020, Eureka (Eurostars, ITEA3) programmes.

Lely develops, manufactures and internationally sells a complete range of products and services for the agricultural dairy sector, from automated feeding systems to barn cleaners and milking robots.

The Lely Group headquarters is located in Maassluis (NL) and was founded by the brothers Cornelis and Arij van der Lely. Lely shifted its attention to farming and invested in robot technology, which led to the Lely Astronaut robotic milking system (1992). Through the constant focus on innovation, Lely currently is a leader in automatic milking, feeding and manure handling.

The focus of supporting the farmer and cows remains crucial, especially combined with lowering the farmer’s operational cost.

Important figures of the Lely Group

Figure 2: The Lely Sphere N-Capture extracts the manure gases in the cellars and just above the barn floor. The filter package in the N-Capture captures the ammonia and converts it, using water and acid, into circular fertiliser.

Figure 3: Photo showing the Lely Discovery Collector that sucks up the faeces at least every two hours and deposits it in a separate manure pit.

Figure 4: The photo shows strips in the slatted floor that separate faeces and urine at the source. The urine flows through the separation strips to the cellar while the faeces remain on top.

Figure 5: The Lely Exos concept is the first system in development for autonomous harvesting and feeding of fresh grass.

Lely Sphere allows dairy farmers to limit the emissions of ammonia from their barns significantly, use the captured ammonia as fertiliser, and divide the animal manure into two mineral streams, giving the farmer the ability to optimise fertilisation for crops and soils by using the value of emissions.

The project is currently (Q2 2021) in validation. The Lely Sphere system is on multiple farms installed in the Netherlands and in one farm in Germany and one farm in Denmark. After receiving the official approval for innovative barn systems for reducing ammonia emissions within the Netherlands (RAV), the commercial rollout will be scaled up. Rollout within other EU countries will be researched in parallel.

Lely is a Dutch producer of robots and data systems for dairy farming with an international network of franchisers and dealers. The company mainly produces automation and management systems for the dairy industry, including fully automatic milking robots for feeding, milking and manure handling.

The LIFE-CMCD project has received funding from the LIFE Programme of the European Union under grant agreement No.LIFE16NLCMCD000363. 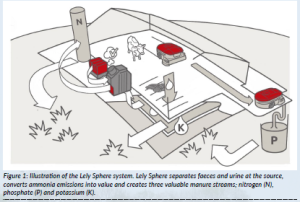 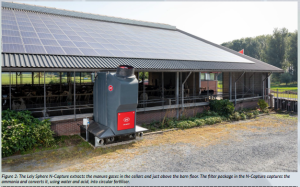 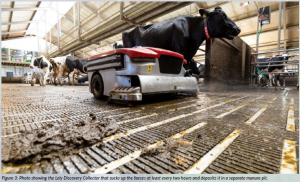 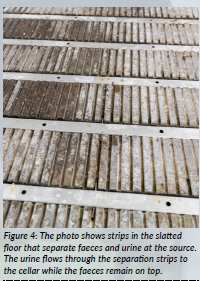 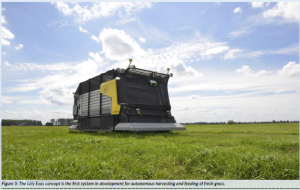 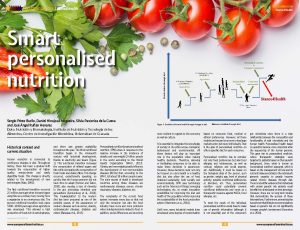 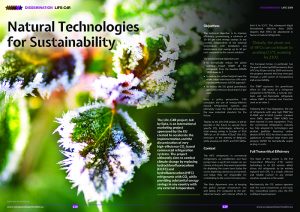