A novel technology that makes it possible to produce affordable insect pheromones is allowing farmers to protect field crops against pests in a sustainable way. The technology has been developed under the auspices of the EU-funded PHERA (PHEromones for Row crop Application) project, which pulls together some of the leading players in biological pest control.

“Being able to control pests in row crops with fermented pheromones is nothing short of a revolution,” says PHERA Technical Manager Irina Borodina, who adds: “With pheromones, we can actually intensify agricultural productivity without losing biodiversity.”

Pheromones are used to control pests by preventing them from mating (see Figure 1). Rather than eliminating pests, mating disruption seeks to keep the population of pests below acceptable levels. It’s a tried-and-tested method in speciality crops in vineyards, orchards and greenhouses. Using pheromones in agriculture at large, in the row crops that really make a difference in terms of food security, has been highly desired but so far unattainable due to their high cost.

Pheromones are complex molecules that traditionally have been constructed via chemical synthesis. It is a multi-step process that involves expensive inputs and hazardous wastes. What the PHERA project has achieved is to scale up a whole new technology based on yeast fermentation to produce pheromones at a cost that enables their use in row crops.

From lab to industrial production

The fermentation technology used to produce pheromones has been developed by BioPhero, a Danish biotech company, which was acquired by FMC Corporation in July 2022. BioPhero has modified the oleaginous yeast Yarrowia lipolytica to function as a cell factory for the biological production of pheromones (see Figure 2). It’s a process known from the production of anything from vaccines and insulin to detergent enzymes. The only difference is that, in this case, the product is pheromones.

What distinguishes fermentation from chemical synthesis is that it’s a one-step process with renewable inputs that can be continuously optimised. This makes it possible to produce pheromones at a lower cost, and a lower cost makes it viable to use pheromones for pest control in even the most price-sensitive row crops.

BioPhero has, over the past few years, scaled up the technology to produce pheromones commercially at an industrial scale and optimised the downstream chemical processing of pheromones, assisted by another PHERA partner, Bioprocess Pilot Facility of the Netherlands, which specialises in piloting bio-based processes.

“Our vision is to make pheromones a mainstream crop protection method,” BioPhero Chief Executive Officer Kristian Ebbensgaard says. “We have developed a technology platform for industrial manufacturing of pheromones in record time, and that is a major step towards using them in row crops, bringing us very close to fulfilling our vision.”

A paradigm shift in pest control

Pests destroy up to 40 per cent of global crop production and cost the global economy over $220 billion, according to the Food and Agriculture Organisation (FAO). Efficient plant protection is, therefore, key to food security. Traditionally, farmers have relied on pesticides to keep pests at bay, but growing concerns about their environmental impact have fuelled calls for alternative solutions. The European Union (EU), for instance, has proposed to halve the consumption of pesticides from 2020 to 2030. In addition, pests develop tolerance or even resistance to pesticides, making many pesticides less effective with time.

A case in point is the fall armyworm. Since 2016, this pest has spread from the Americas to most of the globe. The moth’s larvae feed on many food crops but are particularly fond of maize, the staple crop of more than 300 million Africans. As the pest is developing resistance to most insecticides, it is becoming increasingly difficult to control. In response, FAO has launched the Global Action for Fall Armyworm Control, which is based on a strategy of integrated pest management (IPM).

Pest control is currently undergoing a revolution. Instead of simply eliminating pests, new strategies like IPM are focusing on how to reduce the populations of the insects we don’t want without harming the ones we do want. IPM seeks to reduce the chemical component to need-based application by combining the best biological, chemical, physical and cultural crop management practices with the latest intelligent systems for precision farming. The objective is to keep pests, diseases and weeds below their economic damage threshold by choosing solutions with the least impact on human health and the environment.

Pheromones play an important role in IPM, where they can be used to either monitor pests, prevent outbreaks through mating disruption, or actively reduce their numbers through attract-and-kill that combines an attractant with an insecticide.

Pheromones are easy to apply

With the advances in precision fermentation, farmers can now use pheromones, either as stand-alone control solutions, as part of IPM programmes or in combination with pesticides to reduce overall chemical consumption or overcome resistance challenges.

However, advances in formulation technologies have been equally important. Pheromones have traditionally been applied manually as simple bait formulations or waxy strips to trap or monitor insects. Today, pheromones can be applied in row crops using conventional sprayers or drones. Pheromone formulations now come as sprays, oils, pastes, gels or granules with slow-release properties and optimised handling and storage attributes.

This work is driven by the application partners of the PHERA project: NovAgrica (Greece), Russell IPM (UK), SEDQ Healthy Crops (Spain) and ISCA Europe (France). These partners are now carrying out field trials in various geographies to evaluate fermented pheromones’ performance and their novel formulations for field application. They are supported by ongoing life cycle assessments of pheromone production and application carried out by PHERA partner Fraunhofer, Germany.

The PHERA project took off in 2020 on the back of a €6.4 million grant from the Bio-based Industries Joint Undertaking, a public-private partnership between the EU and the Bio-based Industries Consortium set up to advance competitive circular bio-based industries in Europe. The PHERA project is doing just that by developing a technological platform for the commercial production of affordable mating disruption products for safer and more environmentally friendly pest control in agriculture.

The PHERA project aims to accelerate the global transition to sustainable agriculture by establishing insect pheromones as a viable alternative to insecticides in row crops. The project is scaling up a new, cost-effective method for mass-production of pheromones and is developing application systems for their use in pest control in row crops.

The PHERA project brings together the yeast fermentation know-how of BioPhero (Denmark), the pheromone formulation and application expertise of SEDQ (Spain), ISCA (US), Russell IPM (UK) and NovAgrica (Greece), the piloting capabilities of Bioprocess Pilot Facility (the Netherlands), and the life cycle insights of Fraunhofer (Germany).

Figure 1: Female moths release pheromones to attract a mating partner. When a farmer spreads pheromone in a field, it smells like there are females everywhere, confusing the male. Now, the insects can’t find each other to mate and produce plant-eating larvae. Mating disruption is a safe and environmentally friendly pest control method. As each insect uses its own pheromone blend to communicate, mating disruption does the same, making it safe for other insects, animals and humans. (Image: BioPhero).

Figure 4: To feed the planet without harming it, we need to be able to protect our crops against pests with sustainable tools such as pheromones. (Image: FenlioQ, Shutterstock).

Figure 5: Pheromones can control some of the world’s worst pests, like the fall armyworm. (Image: natthawut ngoensanthia, Shutterstock.com). 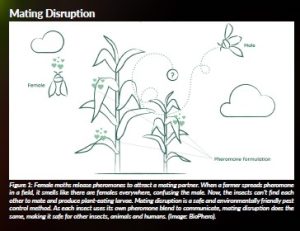 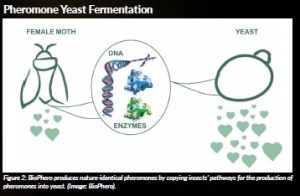 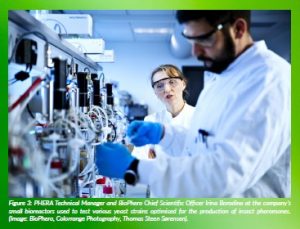 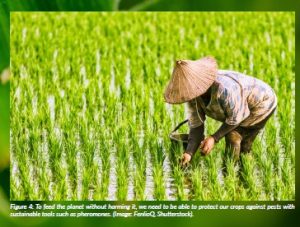 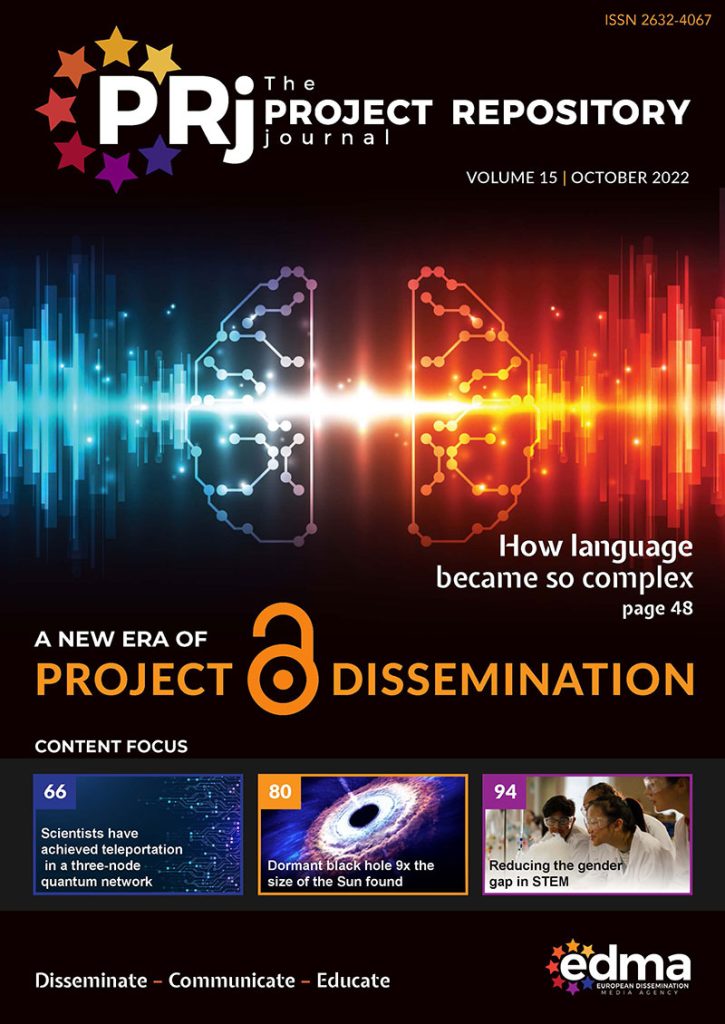 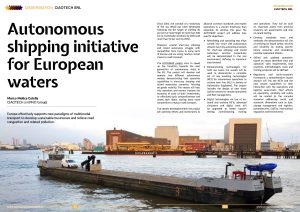 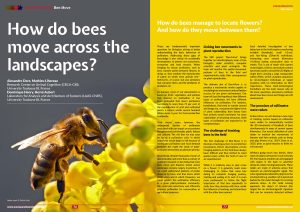 How do bees move across the landscapes? 31st January 2022 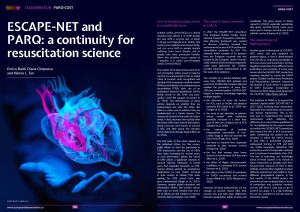 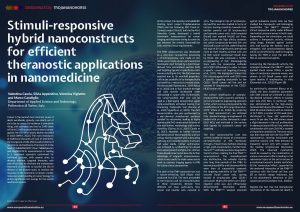