How does the viability of bone-restricted osteocytes regulate bone atrophy?

How does the viability of bone-restricted osteocytes regulate bone atrophy?

Although the skeleton appears stiff and solid, it is, in fact, a dynamic and sensitive network, demanding a fine balance between the bone-resorbing osteoclasts and the bone-forming osteoblasts. Disruption of this homeostasis frequently leads to exaggerated bone degradation by osteoclasts, manifesting in pathological bone loss. Bone metabolism is largely controlled by osteocytes that are terminally differentiated osteoblasts, becoming trapped within the bone matrix (Figure 1).

Osteocytes represent the major cell type within the bone compartment. Nonetheless, for a long time, they were neglected from the field of bone research because they appear biologically inert. Today, their broad contribution to bone remodelling is widely recognised. In particular, osteocytes act as mechanosensors of bone, participate in the recycling of bone minerals and regulate osteoblasts and especially osteoclasts (Bonewald, 2011).

The rather inactive feature of osteocytes allows them to live an average half-life of 25 years. Despite their longevity, excessive osteocyte death is observed upon ageing, notably in bone diseases linked to osteoclast-mediated bone loss, such as osteoporosis, arthritis, fracture, and osteonecrosis (Figure 2A). Up to now, it is not yet known whether increased osteocyte death appears just as a concomitant of bone disease or may even contribute to the disease pathology.

For this purpose, we initiated the ERC Starting Grant project “Unknown functions of Osteocyte DEath (ODE)” to delineate how osteocyte death is induced, in which manner osteocytes die within the bone matrix and which consequences their death has for bone health.

So far, the death of osteocytes is still a mystery. It is believed that factors like oxygen level and nutrients distributed by blood vessels within the bone strongly influence their viability. When shortages occur, osteocytes undergo autophagy to protect themselves from damage. However, when the damage is too severe, the death of the cells is initiated (Komori, 2016). One of the primary goals of the ODE project is to delineate in detail the death process of osteocytes in dependence of different bone conditions, such as arthritis, fracture and osteonecrosis. The use of newly developed imaging techniques and omics platforms will allow us to analyse osteocytes within their remote localisation in the bone matrix. Within this study, we want to answer questions like: Which stress factors (hypoxia, malnutrition, inflammation) cause osteocyte death? Which death pathway (apoptosis, necroptosis, ferroptosis, necrosis) is specifically triggered in osteocytes? Is osteocyte viability important for healthy bone composition, and how is it affected by bone disease?

Generally, the body gets rid of dead cells very quickly by specialised phagocytic cells to prevent sterile inflammation. However, bone is exceptional since phagocytes cannot reach the isolated osteocytes within the mineralised tissue. Thus, at some point, osteocytes are supposed to burst, releasing damage-associated molecular patterns (DAMPs) into the surrounding, thereby priming an inflammatory environment. Last year we published an article describing for the first time that osteocytic DAMPs are able to stimulate osteoclast formation (Andreev et al., 2020). This response is mediated by the C-type lectin receptor, macrophageinducible C-type lectin (short Mincle), expressed on osteoclasts (Figure 2B). As a pattern recognition receptor (PRR), Mincle is able to recognise microbial compounds as well as DAMPs. These results opened many new questions that will be addressed within the ODE project as: Which DAMPs are released by osteocytes upon death? Are other DAMP sensing PRRs besides Mincle expressed on osteoclasts and have an impact on osteoclast biology?

Conclusively, the ODE project will provide a new understanding of the sensitive balance of bone homeostasis and how stress factors in bone such as inflammation and reduced vascularisation influence the viability of osteocytes. We will decipher in detail which impact the death of osteocytes has on the bone environment and bone strength and how we can avoid this negative influence. On a broader scale, we can use the knowledge gained to better understand the pathogenesis of bone loss and discover potential new pathways that might be targeted in the future to prevent bone loss from happening.

Osteocyte death is amplified in many bone diseases and is ubiquitous upon ageing. To date, the impact of osteocyte death on pathological bone loss is poorly studied due to the remote location of osteocytes. Within the ERC Starting Grant project “Unknown functions of Osteocyte DEath (ODE)” we will make use of new imaging and omics technologies to unravel this question.

Aline Bozec obtained her PhD in Biochemistry in 2004. She then joined E. Wagner’s Laboratory at IMP in Vienna (Austria). She moved to the CNIO (Madrid) in 2008, as a Staff scientist. In 2012, she became junior professor at the Medizinische Klinik 3-Rheumatologie und Immunologie in Erlangen (Germany) as junior professor (Emmy Noether grant) in Osteoimmunologie. Since 2019 she is full professor in experimental immune therapy. Her group particularly focuses on the crosstalk between metabolism, bone homeostasis and inflammation in the context of immune-mediated diseases, such as arthritis.

The ODE project is based at the Department of Internal Medicine 3 – Rheumatology and Immunology in Erlangen. For this project, I will work in close collaboration with other Departments of the Universitätsklinikum Erlangen, in particularly Medicine 1 and the Institute of Human Genetics. Imaging will be performed with the help of the Optical Imaging Centre Erlangen (OICE). 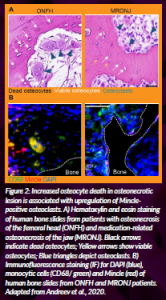 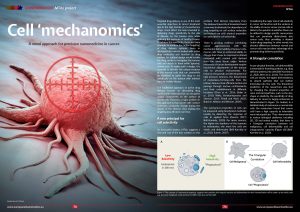